My husband Dave and I decided to attempt Mt. Assiiboine which at 11,870 feet is a significant climb through a variety of terrain elements. It is a beautiful, powerful peak with a siren call. The mountain is guided one-on-one; I climbed with my friend and guide Grant Meekins, and Dave was guided by British guide Richard Howes. Both work for Yamnuska Mountain Adventures in Canmore, Alberta, with whom we climb. After helicoptering in, we shouldered heavy packs—although Grant, prince that he is, took much of my weight, and started the long slog up cliffs and through scree, along a high ridge to a wee hut perched below the flanks of the mountain. The hut is held to the rock by steel cables and has a to-die-for view. At the hut we found a third party, our guide friend James Blench and his petite Japanese lady client who arrived kitted out in a complete set of custom gear including her teensy made-for-her ice axe. After a dinner that included Scotch from a water bottle and tall tales, we slept for a few hours.

The 3 am start had us walking in the dark with headlamps up the mountain’s lower flanks with the goal of arriving at the technical climbing by first light. James was moving fast and left us behind as we climbed scree fields using a short rope technique in which the guide leads the client on a virtual leash about six to eight feet long. Short roping is fast but still allows the guide to catch a slip or a fall before it becomes catastrophic. Conditions were suboptimal: much of the route including the vertical faces were iced over. This would slow our travel significantly and increase the climb’s danger. 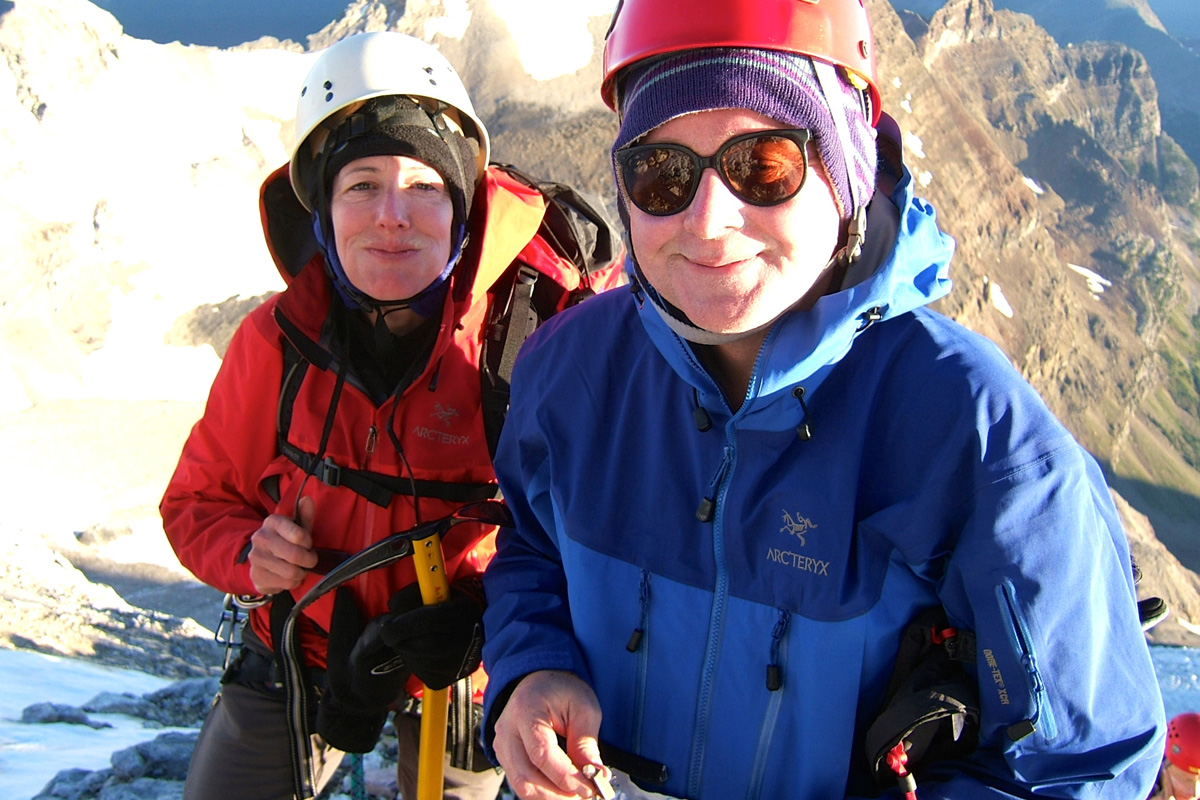 Dave and I stayed together until we stopped for a quick lunch. When you’re climbing a big peak you eat frequently to keep up your strength and body temperature. I was already wearing all the clothing I had brought, and was barely warm enough. After lunch Grant and I took off assuming we would meet Dave and Richard at the summit. Although I was moving as fast as I could, we were climbing in crampons and the ice was slowing us down. Grant ascended carefully, built anchors and belayed me frequently because the route was treacherous. And it was cold. I wasn’t prepared for a winter-equivalent climb. We moved much more slowly than we would have in the usual summer bare rock and sunshine.

After several hours of climbing in the cold, my body temperature plummeted and I was shivering uncontrollably. When I get cold and miserable I become quiet. Inside I’m wretched but no whining on the mountain! Grant was focused on keeping us safe and on route. He hails from the Yukon and has been climbing ice since childhood, so he was at home. 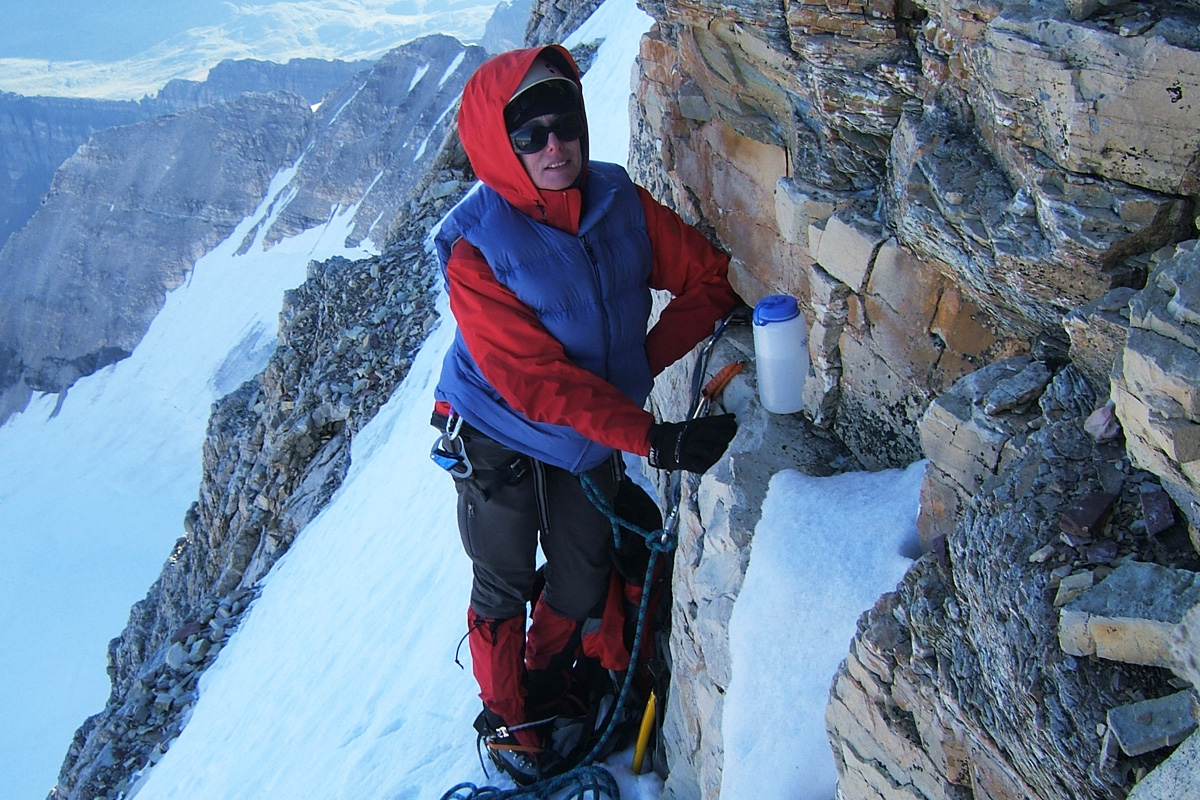 If you want to climb mountains you have to be willing to endure. Cold, sore feet, numb extremities, exhaustion beyond exhaustion, just keep putting one foot in front of the other. Grant and I had climbed together for years, so we knew each others’ ways. He knew I could go on, and I wasn’t about to quit, the word not being in my vocabulary. Finally the sun fried off the clouds bathing us in a modicum of warmth. I thawed and began to think life was pretty good.

The summit! Grant and I hit the top at a perfect moment, few clouds, sapphire sky, an endless earthly vista so vast I swore I could see the curvature of the Earth. We triumphed for a few short moments and then moved to the important task of getting down. As Ed Viesturs says, “Getting to the top is optional; getting down is mandatory.” But no Dave, no Richard. 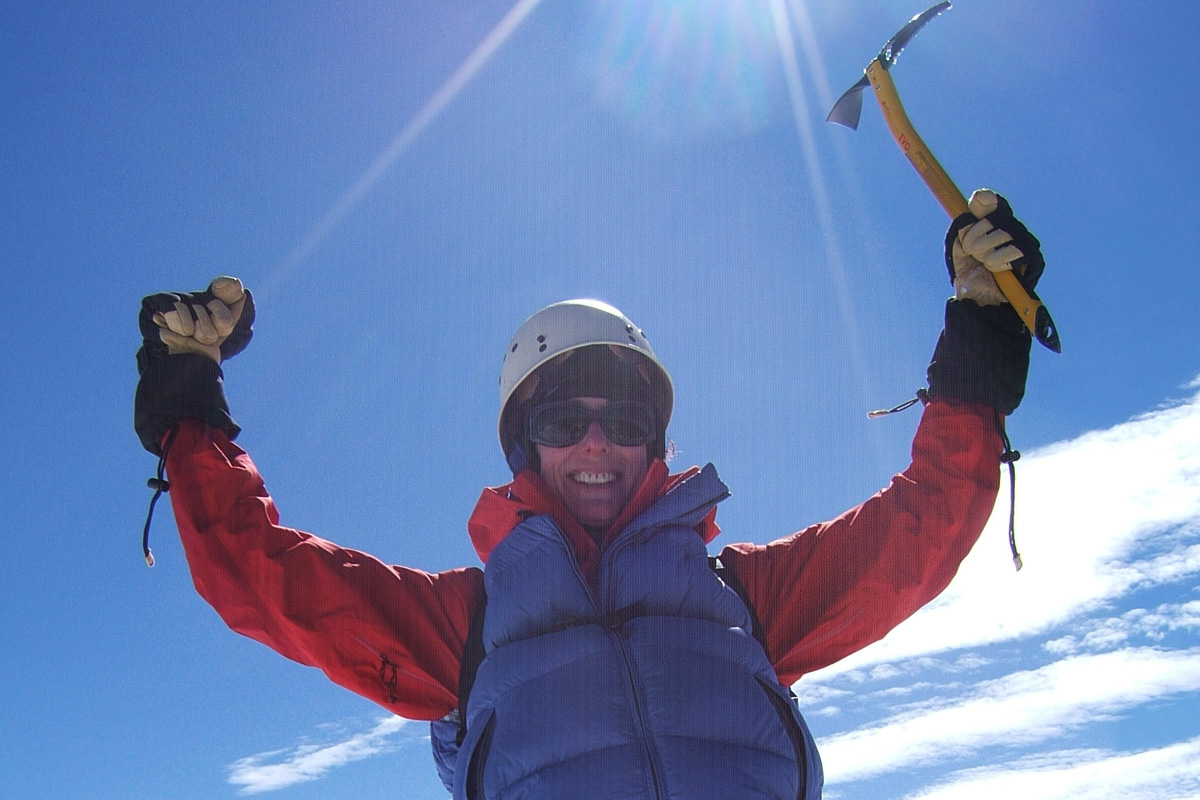 We found them descending. They had been moving too slowly to summit and had wisely decided to turn around. They were disappointed but figured they would bag Assiniboine another day. It was a long way down. Grant and I passed them and eventually, after epic-feeling hours, reached the hut. James and his client had raced up and down and had been back for over an hour. They greeted us with hot tea and canned oysters! I was flattened but perked up from giddy success and hot comestibles. Hours passed, the sun went behind the peak. No Dave. The atmosphere became uncomfortable. This wasn’t supposed to happen. Where was my husband?

Eventually the guides established radio contact. Richard had missed the classic descent. They had gone off route and lost hours and hours picking their way through perilous terrain, and then backtracking. I urged the two guides in the hut to mount a rescue, but they wanted to allow Richard to sort it out. Dusk passed. Darkness fell. I could hear the first line of Dave’s obituary in my head. Finally we heard their feet crunching on the snow. They entered literally dragging and sagging. Dave looked shell-shocked. But it didn’t matter, they were safe. Epic over. The water bottle with the Scotch came out.

The next morning we hiked out and posed, swollen and dessicated, before flying. Coming out from the backcountry is always jarring. One moment exists in the vast silence of the universe. The atmosphere is knife-clean, the air cold and biting. The next moment is an assault of heavy air, heavy smells, bashing noises and a seeming onslaught of people, even if only one or two. Flying out in a helicopter steals any transition.

We later learned we were the sole clients who summited all summer. Our two guides and one other were the only guides. A few years later Dave climbed Assiniboine under a warm sun on clean, dry rock.