A Pope for our time

Pope Francis bent over a recumbent boy wracked by disability. The Pontiff blessed the child and kissed his forehead while the boy’s uncontrolled mouth yawed open in delight and his spindly arms joyfully batted the air. While the Popemobile waited, the Pope walked slowly among the assembled wheelchairs, paying special attention to these special children. The rich and the mighty waited for the blessing of the children.

My daughter and I were among 2,500 pilgrims from around the world in St. Peter’s square for Pope Francis’ weekly public blessing. We were lucky to be on the stage with a closeup view of the religious extravaganza with its Middle Ages roots. Swiss guards in armor and helmets surmounted by yellow feather plumes and holding long hatchet-like halberds stood guard. The attendants who showed us to our seats wore formal tuxedos while priests and monks of every size, shape and color mobbed the seating area with faces alight. The front row was bursting with bishops and archbishops in black robes with magenta hats, belts and sashes.

Despite the enormous crowd, nary a sharpshooter nor police officer was visible. The metal detector had missed my selfie stick.

Surrounded by the Vatican’s marble majesty, the crowd’s oversized enthusiasm for this beloved Pope turned the day into a festival. Many visitor groups wore a single color; their riotous cheering felt like a Texas pep rally. The blessing day took its place in the millennia-long line of Papal theater, through which millions upon millions of Catholics reaffirm their faith with the corporeal body of the pontiff and the puissance of the mighty Catholic Church, a nation-state unto itself.

An orchestra and a number of bands played alternating festive and solemn music. A flag twirling team entertained the masses. Wedding couples in formal garb lined the top of the stage like white-swathed swans and consorts from Swan Lake. A sports team with royal blue uniforms and two athletes holding large torches took their places amidst the sea of clergy. Finally the Pope emerged on the lower level in his Popemobile and spent 45 minutes greeting the throng before walking onto the stage and settling into his chair. He spoke from the chair in an aged voice.

Pope Francis’ speech discussed the crucial role of children in society and to each of us as individuals.

He called on society to protect the next generation saying, “A society can be judged by the way it treats its children.”

A simple, bitingly incisive statement, timely given the horrors of IS and Boko Haram and the exploding Middle East. Targeting children is so easy; they are utterly defenseless. Those who attack them are cowards. Perhaps these monstrous attacks are on the pontiff’s mind, because after the blessing the Vatican announced he will visit the UN. His voice may not affect the terrorists but it may help galvanize the world.

The Pope’s welcome and sermon in Italian were translated by a series of native-speaking Church officials into various languages including French, English, German, Polish and Portuguese. Most of the vast throng received his words in their native tongue. After his sermon, Pope Francis blessed the crowd and particularly stated that his blessing extended to each person’s family and to any religious articles people had brought. Thus his spiritual gift extended to all corners of the globe and from people to concrete articles of faith. His generosity of spirit was remarkable. 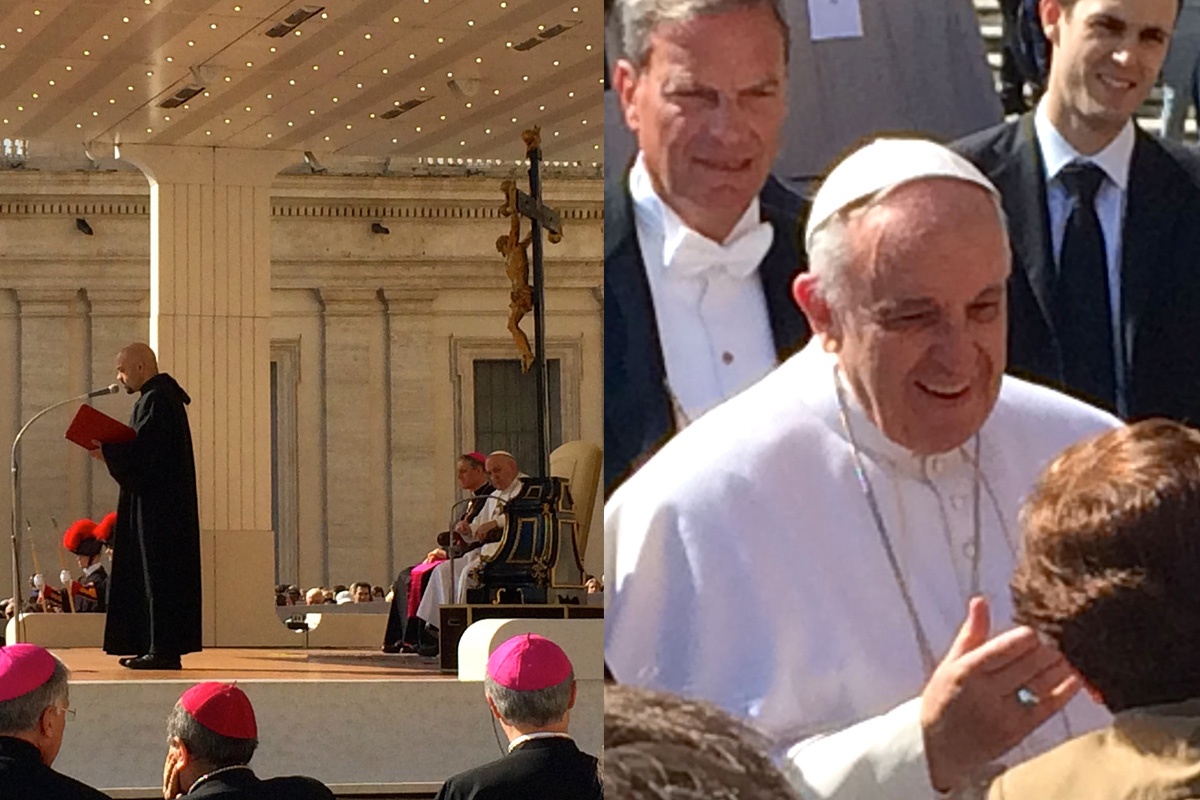 The world and the Church are lucky to have this extraordinary Pope. His heart encompasses the world. He is enlivened by contact with people. The frail-sounding man who sermonized was reinvigorated whilst amongst the crowd, his movements changed from weak to strong, his posture uplifted and his face lit. His recent trip to the Phillippines brought seven million people to one event—seven million.

Seven million people is a good start. Pope Francis is working at it, twice a week, every week he can. At 78 years old, he gives a public blessing on Wednesday and a public angelus service on Sunday. The Vatican goes out of its way for school groups. Cardinals make themselves available–to teach the next generation.

Perhaps Pope Francis will engender a mass spiritual renewal in this beaten down world. One strong enough to overcome Islamic terrorism. A movement focused on simple truths of the heart. Like Protect Children.

His speech mirrored his actions. He spoke of children. He pleaded with us to protect them, and learn from them as a gift to us all. And as he traveled around St. Peter’s he sought them out, kissed babies, touched the disabled and blessed them with all the monumental strength of his prodigious spirit.

Tickets are free for the asking from the Prefecture of the Papal Household.