My glaciers are dying

As someone whose strength was forged climbing glaciated peaks, in August I stood on British Columbia’s Devine glacier watching water heave down a millwell large enough to eat a truck. Numerous arteries roared into a death spiral that consumed the brilliant blue ice. In five years Devine’s depth had lost 25 feet and the toe had receded an eight of a mile.

That morning our backcountry hut’s stream direct from the glacier ran muddy after 9 am. Climate change had poisoned our water. As President Obama said “We will respond to the threat of climate change, knowing that the failure to do so will betray our children and future generations.” Our daunting challenge is to save our feverish world.

Twenty five years ago I started climbing glaciers during Introduction to Mountaineering with Yamnuska Mountain School. Although thrashed by the five thousand feet elevation days, I was hooked. My feet have since stood on many summits. After my two daughters arrived, my family found Selkirk Lodge, a skitouring hut at 7,400 feet amidst the silver peaks with a stream for water and until recently no electricity. The only summer guests, we use the glaciers as summit highways because ice and snow travel is faster and safer than rock. Our girls grew up building fairy houses out of bits of mica, moss, flowers and white stones amongst the turns of the now-muddied stream. That stream was our drink, our shower, our cooking, our washing, our survival.

Water will be a great challenge of our children’s generation. President Obama committed $16 million to Alaskan villages ravaged by climate change as the melting of their sea ice enabled storm surges to batter the towns. Unchecked, the sea level could rise by 21 feet in the next century, inundating coastal population centers according to the UN’s Intergovernmental Panel on Climate Change. NASA data suggests that 2015 will be the warmest year recorded. July’s average temperature was the highest in a century. The California drought is a minor foretaste; water shortages will be followed by the horsemen of failed crops, disease, war and death. See http://www2.worldwater.org/conflict/list/ for the history of conflicts over water, including 14 conflicts in 2014.

This summer helicoptering in to the lodge, my first glimpse rang alarm bells. Across the valley the huge icefall beside which I have climbed had receded two hundred feet up the cliff. Its churning crenellations had disappeared from the lower two cliffbands leaving dripping rock. All around us our glaciers’ surfaces were gray, their normally white snow skin ripped away by high temperatures and a dry winter. This is called a dry glacier. It is dangerous for mountaineers because the underlying crevasses and bergschrunds are exposed, and snow bridges still present are thin and weak.

Glaciers die through a thousand wormholes. Water runs along the surface in channels which enlarge over time. The streams and trickles go subterranean through myriad weaknesses in the ice, burrowing and undermining the entire three-dimensional structure of the glacier, honeycombing it with fault lines. The icefield carves itself out from the inside, finally collapsing upstream from the toe. Our glaciers had been sick for years but finally the warm year dealt a mighty blow. 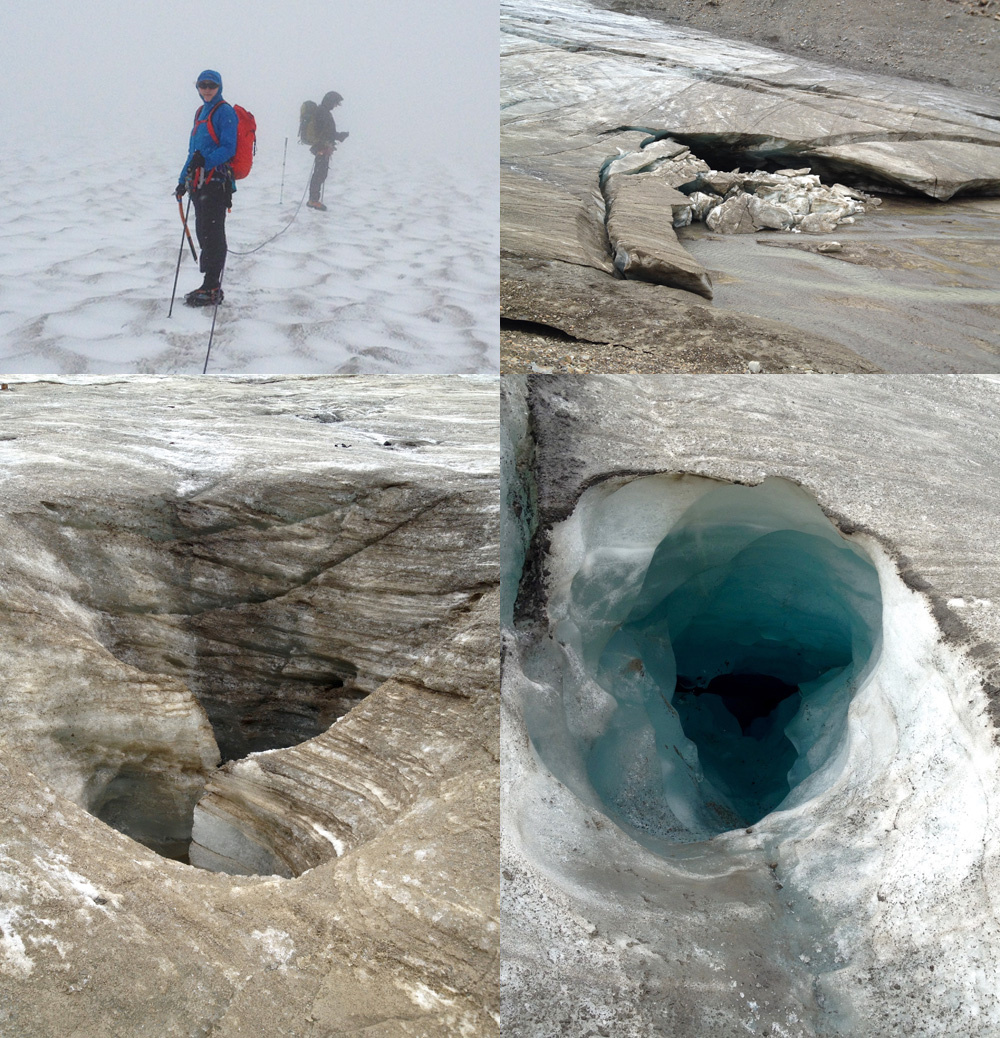 Global warming is speeding up: Devine glacier, Justice glacier, glaciers worldwide, the vast polar ice sheets—all are melting. The polar ice cap is decreasing at 9% per decade. I have seen polar bear dens near Hudson Bay dessicated and abandoned. The Canadian winter that decimated our glaciers was one of the warmest and driest in history according to Environment Canada, with December almost 4oF warmer than average. Winter 2015-16 is facing perhaps the strongest El Nino weather system on record, which will create further warming.

As we planned our objectives for the week, mountain guide Dave Stark declared that for the first time in a decade and a half we would not traverse Justice glacier this year. Denuded it was too dangerous. Bad water and curtailed travel–our wonderland is falling apart.

The vast ice bowl surmounted by Mount Justice is my ‘hood. I was on its summit when my father died two years ago. So one day instead of climbing Mt. Primrose without the helmet I had forgotten, we wandered on Devine glacier exploring the millwells which pocked the surface like schrapnel holes in a bombed-out building. They were beautiful. They were deadly.

My glaciers power the Bow River which nourishes the Bow Valley’s towns and wildlife and then feeds Calgary with its 1.2 million inhabitants, surrounding vast farms, and world class beef ranches. The Bow helps drive Alberta’s economy. Water is perhaps the most important molecule on the planet.

Our children need clean water. We need to protect their world.

Firstly, President Obama’s plan to decrease carbon emissions from coal plants (one third of our emissions) and trucks must be supported—as must continued reduction from cars. As the leading industrialized nation and the globe’s second largest carbon polluter the United States must act. We need to support investment in renewable energy sources: geothermal, wind and solar. The technology is available. US entrepreneurs and scientists have the capacity to lead the world and increase both energy productivity and the country’s economic strength.

Secondly, the will to conserve water and deploy new technologies are crucial. Draining the sea as many argue is ridiculous. Agriculture including irrigation and loss is the second highest water use in the United States at roughly a third of our usage. We are becoming increasing water-productive but we need to continue technology development. California showed that it can be done.

Finally, we must face up to the fact that unchecked population growth will destroy the planet’s resources. At a minimum we must build sensible population density guidelines to protect our local ecosystems and microclimates and conserve water.

I remember my first climb of Mt. Justice atop dozens of feet of snow on the glacier and a snowy summit ridge arcing to a sapphire sky. On top we were potentates over a vast white world. The ice is still there, diminished but holding strong and nourishing North America’s rivers, lakes, drinking water and inhabitants. Our icefields need just a little help; a percent or two of conservation, water productivity, new technologies, will protect our shining seas for future generations.

For each of us, our own one percent.